Valya is a character in the Tomb Raider Comics, appearing in Issue 29 and Issue 30 of Tomb Raider: The Series Vol. 1 by Top Cow.

He spends his youth as a hunter in Siberia.

In the year 1908, when he is seventeen, Valya is tracking a wolf that has slaughtered horses in his village. When he catches up with the wolf, the animal attacks him and they both fall from a cliff. During the fight between hunter and wolf, the Tunguska Event occurs, during which two thousand square miles of Siberian wilderness are turned to ash and both wolf and boy die. 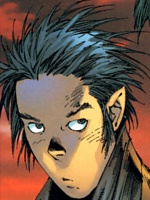 Valya comes to life again as a creature resembling a werewolf, able to switch his form from human to the vicious animal he died with. In his human form Valya has pointy ears and razor-sharp teeth.

Valya tells Lara later, that during his fall he saw a firebird, and it seems that this phenomenon is responsible for his resurrection. Some time later, Valya is captured and put in an underground prison underneath a secret Vatican library were he is bound in silver chains.

When Lara visits the Vatican in the year 2003, to find out more about the whereabouts of the Waters of Life and Death, she enters the underground caverns where Valya is kept and helps him escape.

The two return to Siberia, where Valya gives an account of what happened to him. During this Lara learns that the boy who was Valya in fact died in 1908 and that the creature now before her is an unfinished version of a creature calling himself the Devourer. He claims that fear overtook him when he stole memory and shape from wolf and boy and that he ran, before his transformation was complete. He now expects the arrival of his flesh-kin to complete his transformation.