This page describes the Anniversary Edition of Tomb Raider as it was intended by the original studio Core Design. This project never left the early beta stage, and was finally cancelled when the Tomb Raider franchise was transferred over to Crystal Dynamics by publisher Eidos. 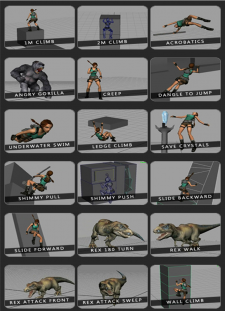 How did the game come about? Did Eidos request a remake specifically for the 10th anniversary or was the game concept left to Core Design’s imagination?

Phil: During the making of Freerunning, about 3-4 years ago, I remember me and Rich having a talk about how good it would be to do a remake of Tomb Raider 1 for the PSP. We approached the ( then ) studio manager Gavin Rummery ( original Tomb Raider coder ) with the idea and he immediately took it and told us he had in fact been looking into the idea himself and had done a few tests on the PC to see if it was viable.

Phil: This was the next project to be done after the completion of Freerunning. However the company was going through a lot of turmoil at the time with SCI buying Core from EIDOS and the release of Freerunning was put on hold at which time the team was put to work on TR TAE.

Phil: I don't think there was ever a chance that Toby would return. I do know he saw our version of TR TAE a couple of weeks before it got canned and I was told that certain events, like the T-REX cut scene brought a wry smile....but I wasn't there so I can't confirm that.

Phil: Initially we were totally confused as to why it was canned also. Whilst we were making the game there was never any hint from EIDOS that Crystal were also making a version and it must have been developed in parallel. When the news came that our game was canned it was pretty devastating to the team. It was quite well advanced along its production schedule and everyone on the team was really happy with the game we had created thus far. Personally I felt very angry towards EIDOS, not because they canned us, that's something you learn to accept in this industry but because they had strung the team along for so many months knowing that they had Crystal producing their version and that they would eventual end ours...In my books that's pretty disgusting and unprofessional behaviour.

In the end I think all the decision making was political, EIDOS didn't want their biggest franchise being developed by a third party developer, which of course Core-Design had then become.

Phil: Being real fans of the series ourselves we wanted to make it instantly recognisable to anyone who had played the original but with enough of a twist to keep players on their toes. So a room might look familiar but it would play quite different, after all game play has moved on somewhat in the last 10 years and we had to make sure that the game play would keep today’s gamer engaged as well as providing those moments of nostalgia.

Did the script undergo many changes? Was it ever considered to use the same voice track from the original Tomb Raider to keep the hardcore fans happy?

Phil: The script was to run along the same lines as the original but again things have progressed over the years and I think we would have had something a bit more cinematic....all done using the in game engine. The original videos were to be included as a bonus unlockable.

It was said quite some time back that the level design for TRAE was built upon the original level structures of Tomb Raider 1. Could you tell us more about this?

Phil: We did have all 15 original maps, exported from the original game, to use as templates for the new levels. This would provide us with the feeling of familiarity within the level design but advances in graphics and code allowed us to ' open ' up a lot of these area's bringing a much grander scope and feel to many of them.

Shortly after the leak of the TRAE trailer it was stated that the version used was that of the PS2 build. Is it true that Core were planning on releasing the game for the PS2 and PC as well as the PSP stated on the trailer?

Phil: The trailer was actually running on the PSP, though many people still seem unable to believe it,so the team was quite chuffed when everyone thought it was running on the PS2. We were developing a PS2 version at the same time which was looking sweet and I'm sure a PC version was on the cards.

It was noted by quite a lot of fans that the Lara Croft model for this game is strikingly similar to the Tomb Raider Legend model. Could you fill us in on some of the design decisions on the look and feel?

Phil: The model was created in house from scratch by Jamie Gibson but we were asked by EIDOS to adapt some of the clothing /accessories to closer resemble the Legend model.

We have seen animation of a bear performing a surprise attack on Lara. What other elements of improved AI would we have been treated to?

Phil: The one thing we hated about the original game was the fact that you could stand on any block and blast the hell out of the enemies. That just wouldn't cut it these days. So we designed as many of the enemies as possible to be able to climb and jump etc, so that they could pursue you relentlessly across the map. Any that couldn't would hide and take cover until you were vulnerable again. We also wanted you to have to lure some of them into traps, for instance the T-Rex. On the lost valley level you had to construct a trap during periods when the Rex was stunned and the lure him into it.

What excited you most about the game? What new features?

Phil: Knowing that fans of the series would come away with a big grin after playing it. From seeing how we took an old map and made it look spectacular to catching them out with some very clever new takes on the old puzzles....oh yeah and we were going to have a co-operative multiplayer version using a new character, Melissa Croft, which involved 2 player takes on many of the puzzles.

What are your future plans? Are you working on any exciting projects now that you can tell us about?

Phil: Yes but for a new company (working with many of the TR TAE team) so I can't reveal anything yet.

First of all we would like to congratulate you on Lara receiving the converted ‘blue plaque’ award. Will it be sad to see the Derby offices go or do you focus on the positive of Lara being acknowledged with such an honour?

Richard: It’s great that Lara has received the Blue Plaque, regardless of where her current home resides.

How did the Anniversary Edition come about? Did Eidos request a remake specifically for the 10th anniversary or was the game concept left to Core Design’s imagination?

Richard: Core developed the idea, myself and a few others came up with the idea and suggested making it. We knew we wanted to remake the original for the new generation and celebrate the 10th Anniversary of the first game.

Richard: Work first began in late 2005, we had a year to finish it which would have meant the game would have been released in time for xmas 2006, the 10th Anniversary year.

Richard: Yes, Toby was working on Legend at the same time as we were working on 10th Anniversary. There was never any talk of Toby working with us though.

Richard: It was a strange time really, we’d just finished Free Running for PSP/PS2 and had developed a really good control system and camera, we started messing about with a Lara model on the PSP in the Free Running engine and the idea of 10th Anniversary was born. We suggested it to Eidos who allowed us to develop it, but when Core was sold to Rebellion it seemed like they didn’t want the franchise to go ‘out-of-house’ hence the cancellation of our project.

Richard: We wanted to stay true to the original in terms of story and level flow, but we also wanted to offer the player something new in terms of moves and puzzles, so many of the big puzzles were twisted around to be different but still familiar to the player. We wanted to make the good bits even better and re-imagine the bad bits into something spectacular, we even planned an new extended ending level.

(Please note that this template is obsolete. The next time you edit this article, please exchange "more" for "edit".)
Retrieved from ‘https://www.wikiraider.com/index.php?title=Tomb_Raider_Anniversary_Edition_(Core_Design)&oldid=38539’
Categories: