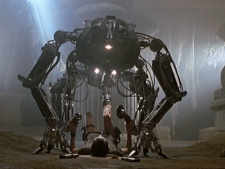 S.I.M.O.N. is a robot making its appearance in the first Tomb Raider Movie Lara Croft: Tomb Raider. It was created by Lara's friend Bryce Turing and serves as Lara's sparing partner in some of her training sessions.

In the session shown in the movie Lara is attacked by S.I.M.O.N. while she's trying to retrieve a treasure. Its mission is to kill her and he is not "programmed to stop before it takes her head off" as Lara states it. It however responds to Lara's "stop" command. Much to Bryce's displeasure, she damages his exterior with the bullets fired by her guns. She also pulls some wires while fighting him.

S.I.M.O.N. is equipped with six limbs. The lower two serve as legs, the two in the middle are only equipped to operate its tools and the two upper ones can be used for swing attacks or improve its movement. At its front is interface terminal at which its programming can be adapted. The display shows its current mission. S.I.M.O.N. is able to play music, which can be output to speakers in all of Croft Manor. At the beginning of the training shown in the movie he plays Absurd by Fluke. After Lara stopped him and inserted her own music via a Sony Memory Stick, labelled Lara's Party Mix, he's playing Speedballin' by Outkast.