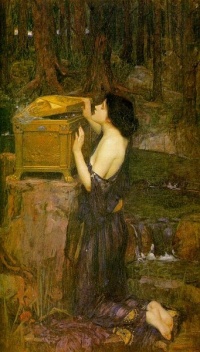 In Greek mythology, Pandora ("all gifted") was the first woman. Zeus ordered Hephaestus to make her as part of the punishment of mankind for Prometheus' theft of the secret of fire. According to the myth, Pandora opened a container releasing all the miseries of mankind—greed, vanity, slander, envy, pining—leaving only hope inside.

The myth of Pandora is very old, appears in several distinct versions, and has been interpreted in many ways. In all literary versions, however, the myth is a kind of theodicy, addressing the question of why there is evil in the world. In modern times, Pandora's Box has become a metaphor for the unanticipated consequences of technical and scientific development. The evidence of the vase-painters reveals another, earlier aspect of Pandora.