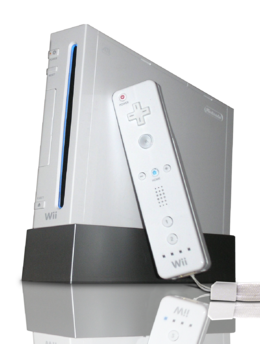 The Wii is the fifth home video game console released by Nintendo. The console was previously known by its project code name of Revolution and is the direct successor to the Nintendo GameCube. Nintendo states that its console targets a broader demographic than that of Microsoft's XBox 360 and Sony's PlayStation 3 and even though the three consoles are of the same generation, their games are also quite different and they cannot be compared.

There is only one Tomb Raider game for Wii yet.

A distinguishing feature of the console is its wireless controller, the Wii Remote, which can be used as a handheld pointing device and can detect motion and rotation in three dimensions. Another is WiiConnect24, which enables it to receive messages and updates over the Internet while in standby mode.

Nintendo first mentioned the console at the 2004 E3 press conference and later unveiled the system at the 2005 E3. Satoru Iwata revealed a prototype of the controller at the September 2005 Tokyo Game Show. In the 2006 E3, the console won the first of several awards. By December 8, 2006, it completed its launch in four key markets.