From WikiRaider
(Redirected from Mobile Phone)
Jump to: navigation, search 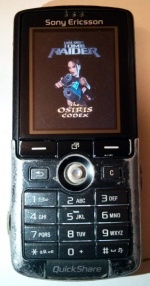 The Osiris Codex running on an old Sony-Ericsson K750i

Since more powerful Mobile Phones with colour displays appeared in the early 2000s, there have been a couple of Tomb Raider themed games released for them. Most prominent among them are The Osiris Codex and Quest for Cinnabar. There was also a re-release of the original Tomb Raider for the Nokia N-Gage, an early Smart Phone that was aiming to integrate features of mobile consoles.

These games use the Java VM (J2ME) included in many of these cell phones. Since theses phones are by far not as powerful as later Smart Phones - which appeared towards the end of the 2000s and became popular in the 2010s - these games are mostly two-dimensional Jump and Runs or puzzle games like Tomb Raider: Puzzle Paradox.