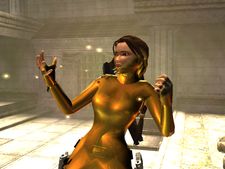 Legend has it that everything King Midas touches with his hands is turned into gold, even if it is Lara. In the Greece level of Tomb Raider and Tomb Raider Anniversary a huge statue of King Midas can be found. A puzzle must be solved with this statue: When Lara places a Lead Bar on one of the hands of the statue, the bar turns to a Gold Bar. As expected, when Lara stands on the hands, she is instantly killed while quickly turning into a gold statue herself.