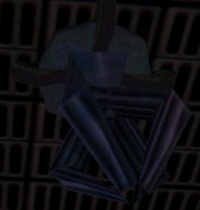 The Mechanical Claw is a trap that appears in Tomb Raider Chronicles in the level The Base. It is controlled by a man located inside one of the rooms of the base. When Lara is in its range, the claw will move above her position and come down on our heroine, sometimes killing her with only one blow.

The best way to avoid this is to just keep moving and look for shelter. It's possible to observe the Mechanical Claw by keeping track of its shadow. When the shadow stops near Lara or directly on her spot, the claw is about to come down. Listening to the sounds it makes is also one way to keep track of the claw's movements.