Lara's Phone can shortly be seen in the introductory Cut Scene of Tomb Raider (2013) as she puts it down on her desk, right next to some books and her Sisters of Artemis Thermos Cup. This phone probably was destroyed when the Endurance sank. In the Blood Ties DLC of Rise of the Tomb Raider: 20 Year Celebration Lara has a new phone that looks quite similar to this one.

Lara's 2013 phone is black and looks a bit like a iPhone, although the distinctive button on the lower end is missing. It is placed in a white/transparent silicon protective cover. 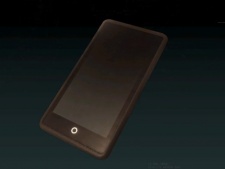 Lara's 2015 phone is also black, this time with a round button or fingerprint sensor on the lower end. It is placed in a dark grey protective cover.

We never see her use or handle this phone. It can be found in the Main Hall of the Manor near the main entrance. A Message to Jonah is recorded on it.

In Lara Croft Tomb Raider: Legend and Tomb Raider Underworld Lara used a PDA instead of a Smartphone to stay connected with Zip and Alister.