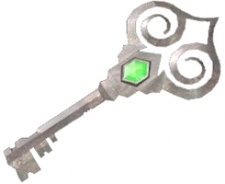 Key of Atlas as it appears in Tomb Raider Anniversary

Key of Atlas is a Key found in the level Greece - St. Francis Folly in Tomb Raider Anniversary.

It's located in a chamber dedicated to the mighty Atlas, a Titan in Greek mythology. The key is decorated with a light green gem, and it's one of the four keys needed to open the door to the Coliseum.

To reach the key, Lara frist has to cross the huge pit that's between her and a long ramp. To do this, Lara has to turn the turnable swich as far as it goes counter clockwise. This causes platforms to extend from both ends of the pit, covering it for a short time and enabling Lara to cross it.

There's a huge statue at the end of the ramp that portraits a man figure carrying a huge globe on his shoulders. Below the statue there are two sets of spikes in front of a niche, where the Key of Atlas is laying on a pedestal. It's not hard to guess that the globe will come rolling down like a boulder, but it's not going to happen just yet. First, Lara has to climb a few ledges on the left wall of the ramp, leading her to a switch. Using the switch extends a horizontal pole over the pit.

Now Lara should stand as far as possible from the statue, but still be able to shoot the shootable buttons on both sides of the Atlas Statue. The targeting reticule doesn't have to be red in order to succesfully hit the buttons. After the first shot the globe on the statue makes a little lurch forward, and after the second button it starts to roll. Both shots also lower the spikes. Immediately after the second shot Lara should run back towards the pit, jump to the pole and jump quickly to the same spot where the turnable switch is.

Since the rolling globe broke the horizontal pole, Lara has no choice but to turn the turnable switch again to cross the pit. Now she can reach the Key of Atlas.