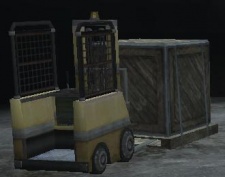 A Forklift is a vehicle used for lifting and transporting large items such as crates.

In Tomb Raider Chronicles such a forklift is found in the Backstage Area of the Roman operahouse, in the level Streets of Rome. It holds up a metal crate and enables Lara to climb up to the upper level. The forklift is immovable and can not be used for anything else.

In Tomb Raider Legend, when exploring the King Arthur Museum in the level England - King Arthur's Tomb?, Lara finds a forklift she has to use to move crates around. It will enable her to stack up the crates in order to get into Professor Worth's office. She then has to use it to clear a path down into the catacombs. It can be used to destroy the tombs below and uncover the Rewards hidden within. After breaking through a wall Lara has to drive it through spike traps and open gates with it. In a quick time event Lara has to jump off the forklift, before plummeting to her death.

When driving the forklift in Tomb Raider Legend, the following controls apply: