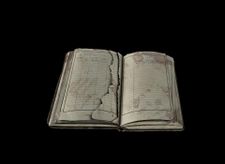 The Flight Log is an Artifact in Shadow of the Tomb Raider. It is part of the Myth, Magic & Monsters collection. It can be found in the Peruvian Jungle near the Base Camp Plane Wreckage.

The Flight Log was written by Miguel, the pilot the flew Lara Croft and Jonah out into the jungle where the plane was hit by a freak storm and crashed. Shortly after finding the log, Miguel gets attacked and killed by a Jaguar.

This is the flight log from our plane. Miguel made notes about the long term weather forecast. Warm, hot, and dry, for the next three days. Highs in the low thirties, mostly clear skies, with nothing but light rain expected. Based on his other entries, if Miguel had thought the chances of a severe storm were better than half, he wouldn't have flown us at all. But there was no storm predicted, let alone something serious.
Artefact description in the game inventory
Retrieved from ‘https://www.wikiraider.com/index.php?title=Flight_Log&oldid=50787’
Categories: