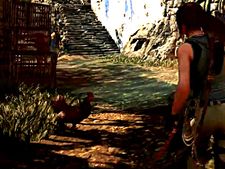 A Chicken in Paititi

There is a Rise of the Tomb Raider Challenge in the Geothermal Valley called Fowl Play where Lara has to catch five chickens and toss them into the chicken coop.

In Shadow of the Tomb Raider chickens can be found in the Mission of San Juan market place. Unlike in the previous game they cannot be picked up and tossed around. As Lara can't use her weapons with all the civilians around, they cant be shot, either.