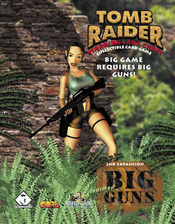 Big Guns is the second expansion for the Collectible Card Game, released in April of 2000. It was the last expansion to be released before the closure of Precedence Entertainment.

DINOSAURS, DRAGONS and TIGERS, OH MY!
Big Game requires Big Guns. So load up with everything from Flame Throwers to Rocket Launchers as you enter the Lost Valley with Lara Croft to face her greatest obstacles yet in search of the fabulous Dagger of Xian.
~ Package Description

The set consists of 159 cards, plus an additional 8 promotional cards. Unlike the previous card sets, this one did not come with accompanying Quest Decks.

The following products were for sale...