Werner von Croy is an Archaeologist and Lara's former mentor.

When she was 16, he brought her to Angkor Wat, Cambodia for her first adventure. This was in the first two levels of The Last Revelation. Werner wanted to collect the Iris, but in the process he hurt his leg. Since then he had been using a Jackal Walking Stick.

Later in her life Lara stole the Iris, which they got in Cambodia, from him. She infiltrated VCI Headquarters and escaped with the Iris in Tomb Raider Chronicles.

Their next meeting was in Egypt when both were trying to get the Amulet of Horus. Even after Lara got the Amulet the chase continued and both parties went searching for the Armour of Horus in The Last Revelation.

In The Angel of Darkness we learn that Werner was murdered in Paris by the Cabal, or more accurately by Pieter Van Eckhardt.

Lara was accused to have killed him. She visited Margot Carvier, his contact working in the Louvre, and also a friend, to get Werner's Diary. 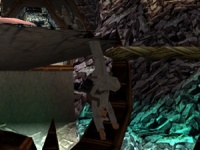