Difference between revisions of "Unknown Entity" 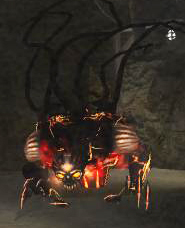 The Unknown Entity is a monster first encountered in a ruin near Paraíso, Peru where it slaughtered most of Lara's colleagues. The creature's past and even name are unknown; it is contained in a stone called the Wraith Stone that is pried from a portal by Amanda Evert. The full extent of its powers include throwing fireballs, teleporting and merging with other being. One who obtains the stone can have complete control of the entity. It is possible that the entity is the Tiwanakan equivalent of Merlin as both have the role of protecting the bearer of excalibar and furthermore killing intruders who enter tiwanakus tomb.

It is affectionately called 'Fluffy' by many fans thanks to the fact that it is Amanda's pet.

The entity is first encountered in a Peru flashback, in Tomb Raider Legend and later in Kazakhstan, where it was brought by Amanda by using the Wraith Stone. In Bolivia - The Looking Glass Amanda will merge with the creature to form the Amanda Entity.

From the official site

An unexplained malevolent entity of unknown origin, Lara first encountered it in some ruins near Paraíso, Peru where it slaughtered most of Lara's colleagues.

After the events of Legend, Lara keeps the Wraith Stone in her vault in the Croft Manor, but it is stolen from her by her doppelgänger and given back to Amanda. Amanda later uses it to help Lara fight Thralls in the Arctic Circle level as Lara goes to find her mother.