Tomb Raider Legends The Board Game 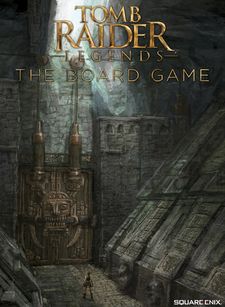 The image used for the packaging is reminiscent of the Peru - Mountain Caves level from Lara Croft Tomb Raider: Anniversary.

Please Note: The Rules described here are based on the GamesCom 2018 prototype and are subject to change. Also, they are not complete but are rather intended to give a short overview of the game to a person interested in buying it.

The game is playable by 3 or 4 players who are playing different versions of Lara Croft, each from a different Classic or LAU game. The Start Token determines who starts each round and is given to the person who most recently was on an adventure.

Lara has to find a way through six locations - five Area Tiles and one Climax Tile, chosen at random and only revealed on entering the area. For each location Lara has to reduce the Thread Level (marked on the bottom of each the Area Tile) to zero in order to be able to progress to the next and thus from start to finish. On her way Lara also is looking for an Artifact (the Scion); there is only one Artifact, as well as two Artifect Replicas. In order to progress from the Climax Tile to the Goal, thus finishing the game and becoming the true Lara Croft, one has to be in possession of the real Artifact - which means that there is a fierce competition between the different Laras who are trying to steal the Artifact from one another.

To progress through the areas, the player chooses three of his Action Cards and places them in the order he or she wants to play them on their character board. These actions include Explore, Rest, Assault, Steal, Action and Rush.

Assault and Steal can only be played against players who are currently on the same tile. All Actions can be boosted with XP a player can gain e.g. through reducing the Thread Level or through Assault. This makes the actions more efficient, e.g. a boosted Assault enables the player to also steal the Start Token from a player.

Whoever reaches the goal first - with the Artifact in their possession - wins the game; only the holder of the Artifact can progress from the Climax Tile to the Goal.

The game was first teased on social media on 17 August 2018, one day before the actual announcement[2].

On 19 August 2018 an image of the Scion was posted on social media[3], with the instructions to download an image and find the hidden clue in the title. Adjusting the colour curves using an image manipulation program like GIMP or Photoshop reveals a message in the "Artifact" heading of the image: "See it first at GamesCom Hall 5.2 Booth E19".

Members of the 2018 GamesCom Official Fansite Program's Ambassadors had the opportunity to play a prototype of the game at the booth of Square Enix Products on Wednesday 22nd, after a short introduction by Fabian Weber. Reactions were overwhelmingly positive.

The following reason for adding it to the list has been given: more info needed. Further reasons might be found on the "discussion page".

(This notice may only be removed by the Admin.)