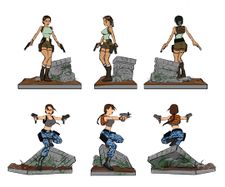 The Tomb Raider 20 Statues made by Gaming Heads are a series of six Resin Statues. The first of the set - from the original Tomb Raider - was made available for pre-order on 20 March 2018, with an estimated release date of Q3 2018. When ordering a complete set of all 6 statues one can get the same edition number on all of them.

The six statues are in celebration of the 20th Anniversary of Tomb Raider - which occurred in 2016 when the planning for these statues supposedly started - although they were not formally announced until October of 2017.

The six statues in the set are of Lara from the original 1996 Tomb Raider, Tomb Raider III, Angel of Darkness, Tomb Raider Legend, Temple of Osiris, and Rise of the Tomb Raider. There will also be slight variations of these available (like the ToO statue with or without the Staff of Osiris) as special editions.[1] 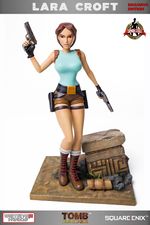 The first statue made available for preorder was the Tomb Raider: Lara Croft Statue from the original game on 20 March 2018.

It comes in three varieties: Regular, Collective, and Exclusive: