From WikiRaider
Revision as of 17:13, 24 June 2012 by The Poet (talk | contribs) (formatted the article according to the WikiRaider:Sample Outfits)
(diff) ← Older revision | Latest revision (diff) | Newer revision → (diff)
Jump to: navigation, search 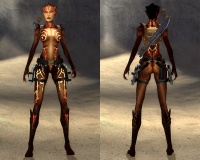 Scorched Natla is one of the unlockable outfits in Tomb Raider Anniversary. It can be picked after unlocking and choosing it from the menu when replaying a level.

The Scorched Natla outfit can be unlocked by collecting all of the relics in the game, which means the total of eight relics.