Difference between revisions of "Scion"

The Scion of Atlantis
The Scion is the artifact that Lara searches for in Tomb Raider and the remake of the original: Tomb Raider: Anniversary. It was created by the three leaders of Atlantis, Qualopec, Tihocan and Natla. The Scion composed of three segments to represent the democratic leadership that the three used in governing Atlantis. Each of the rulers was entrusted a piece of the Scion, which they wore around their necks.

The Scion was used to create the army of Atlantis, mutants grown in hatcheries inside the Great Pyramid. Aware of the power contained in the device, Tihocan and Qualopec were wary of its use, but Natla went against them and used the Scion for her own genetic experiments. When the others discovered Natla's treachery they condemned her to eternal imprisonment and sealed her piece of the Scion deep within the City of Khamoon, in Egypt.

After the destruction of Atlantis, Tihocan and Qualopec went their separate ways, travelling to different corners of the world and founding their own respective civilizations. Qualopec gave birth to the Incan civilisation whilst Tihocan founded classical antiquity around the Mediterranean Sea. When each ruler died, they were buried along with their piece of the Scion. Qualopec's tomb lies deep within the Andes mountain range in Peru, whilst Tihocan was buried beneath a vast ancient complex in Greece.

Lara recovered all three of the lost pieces of the Scion, but it was then stolen from her by Natla. She used it to continue her genetic experiments in the Great Pyramid, the only part of Atlantis to survive. Her aim was to create a mutant army capable of vast domination. The Scion was destroyed as it levitated on its altar in the top chamber of the pyramid by Lara.

The remains of the Scion lay within Lara's treasure vault. It is unlikely that she gathered the remains after she destroyed it since she was struggling with Natla at the time. It can be assumed that she returned to the remains of the island where the Great Pyramid was situated and excavated it, or that the pieces may be reproductions. 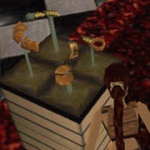 The Scion returned in Tomb Raider: Anniversary with a new look. It is still composed of three pieces lying in the same three locations. It powers of creating mutant soldiers for the army of Atlantis remain as well. An extra feature as explained by Natla was the Scion being a memory bank of knowledge from the civilizations of Atlantis and its predecessors. Basically it contained a blue print of all ancient civilizations. The Scion was required to burn Atlantis in order for the seventh age to begin. The age and its purpose remains a mystery. 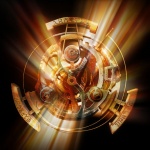 Brother Herbert of St. Francis' Folly described it as possessing "powers beyond the creator himself". It seems that it is essential to Natla's experiments and is the power source of the Great Pyramid, in addition to containing all the powers metioned above. The pyramid cannot be activted until the Scion is placed in its altar in the throne room. The room is situated atop the main chamber and thus is the highest room in Atlantis.

In Anniversary, the Scion activated the pyramid as per usual but Natla mentions it being needed to burn Atlantis in order for the seventh age to begin. The Scion possibly might have contributed to the destruction of Atlantis. This is in contrast to a meteor which destroyed Atlantis in the original game.