Difference between revisions of "Room Editor" 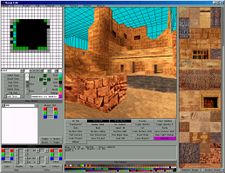 The Room Editor (found as a Windows executable file called winroomedit.exe in the installation path of the level editor) is the heart of the Level Editor. It (or it unofficial successor, the Next Generation Level Editor) is used to build the map of any the many Custom Levels available on the internet today.

The Room Editor is used to create environments, texture the scenery, place Objects - like Traps, Enemies, or even Lara Croft herself -, set Triggers, and more.

The Room Editor was released with the other Level Editor tools on the original Tomb Raider Chronicles CD-Rom. Since then it has been uploaded to various sites on the internet.

The Room Editor - as well as all the other tools provided - are somewhat user unfriendly, as they were originally never intended to be released to the public. Older versions of the software have been used to create the official Classic games (TR 1 through 5) by Core Design.

What the Room Editor is NOT

The Room Editor does not provide the ability to create new objects, re-texture existing objects, or mix objects from various WADs. These operations can only be performed with one of the countless third party Levelbuilding Tools.