Difference between revisions of "Robots" 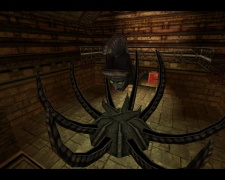 Robots are machines that follow their programming. In the Tomb Raider Games, in there are two enemies that belong to the robots class. In the Tomb Raider Movies Lara's friend Bryce Turing owns a couple of robots of various sizes, among them the training robot S.I.M.O.N..

The robots found throughout the games, so far only in Tomb Raider Chronicles, share one important attribute, they are impervious to Lara's regular bullets and have to be beaten by other means.

Other enemies that utilize robots can also be found in Tomb Raider Chronicles:

This disambiguation page lists articles associated with the same title.
If you were led here by a link, you may wish to change it to point directly to the intended article.
Retrieved from ‘https://www.wikiraider.com/index.php?title=Robots&oldid=29436’
Categories: