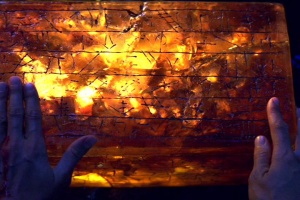 Lara holds Pandora's Box in The Cradle of Life

According to Greek Mythology, Zeus created a human woman, Pandora, as a wife for Epimetheus, the god Prometheus’ brother. This was to be Zeus’ revenge against Prometheus for giving the power of fire to man. Other gods helped Zeus by endowing Pandora with loveliness and persuasion. Zeus’ final gift to Pandora was a box, one she was warned not to open. Being human with a gift of curiosity, she could not resist the temptation. This lead to a terrible discovery. The box contained every possible evil that could harm and plague mankind. A distraught Pandora tried to close the box before these forces escaped, but she was too late and evil flew out into the world. It is said that the last thing to come out of the box was hope, before Pandora cried black acid from her eyes because of the wrong she had committed.

Tomb Raider: The Cradle of Life

In Tomb Raider: The Cradle of Life, Lara Croft has been hired to find Pandora's Box, which supposedly contains the deadliest plague on Earth, before evil scientist Jonathan Reiss can get his hands on it. The key to finding the Box, which is hidden in the mysterious Cradle of Life, is an orb that is supposed to be some type of map.

The orb is a map
Lara and Terry Sheridan embark together on an adventure that spans continents in an attempt to obtain the luminous orb that will lead them to Pandora's Box. Clues unveiled lead the pair on separate paths to the Kilimanjaro in Africa where they meet to continue the final lap of the journey. Once they enter the Cradle of Life, Terry attempts to take Pandora's box as a prize for helping Lara find it. This results in Lara being forced to kill him. Lara contemplates opening the box but decides to let it rest untouched in the Cradle of Life for eternity. "Some things are not meant to be found."
Retrieved from ‘https://www.wikiraider.com/index.php?title=Pandora%27s_Box&oldid=41839’
Categories: