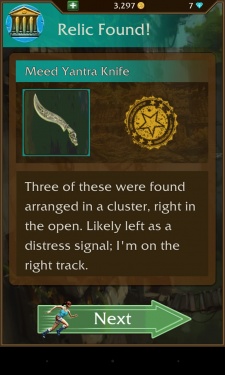 The Meed Yantra Knife is a Relic found in Lara Croft: Relic Run. It is the third relic that can be found in the Jungle Temple level after collecting four clues in the sixth level. (Originally seven clues in endless mode before version 1.5.68.)

Three of these were found arranged in a cluster, right in the open. Likely left as a distress signal; I'm on the right track.
in-game info
Retrieved from ‘https://www.wikiraider.com/index.php?title=Meed_Yantra_Knife&oldid=45254’
Category: