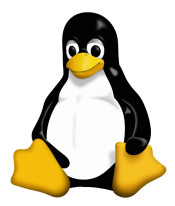 Linux (or GNU/Linux) is an open source alternative Operating System created in the early 1990s by Linus Torvalds, implementing a POSIX compatible Unix-like system. Since then it has become a major player in the server market - e.g. almost all web servers run Linux - and for embedded systems like Smartphones - e.g. Google Android runs on a Linux system. It supports a wide variety of hardware, from common Intel and AMD x86/x64 PCs to Arm or PowerPC based systems to huge server farms with hundreds or thousands of CPUs.

Linux on Desktops is still rather scarce, there are only a few enthusiasts that run a Linux desktop system instead of Microsoft Windows or MacOS X as their primary OS. Nonetheless at least one of the Tomb Raider Games has been officially released for Linux. (See list below.) Most games can be played using Wine, an execution layer that simulates most of the Windows API, but results vary widely.

Linux comes in many different distributions, of which Ubuntu has become one of the more predominant in recent years, but it is still possible to build a system directly from the freely available source code, either directly or by using source code distributions such as Gentoo.

A distribution aming at gaming is provided by Steam in the form of Steam OS and even sell their own hardware optimized for Linux, the Steam Machine; they also provide access to many games ported to Linux. This development has sparked new hopes that in the future games might be developed with Linux as an alternative in mind.

The following Tomb Raider and Lara Croft Games have been released for Linux, either as a stand alone retail version or as a download version.