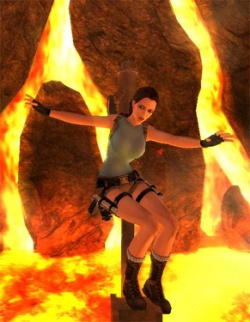 Lava is molten rock expelled by a volcano during an eruption. When first expelled from a volcanic vent, it is a liquid at temperatures from 700-1,200 °C. Throughout the games it often serves as a trap.

Lava appears in the first Tomb Raider game during Atlantis, either as a pool or oozing from the walls.

In Tomb Raider II Lara will encounter lava in the Floating Islands level.

Lava returns in Anniversary in the form of pools, puddles and waterfalls.