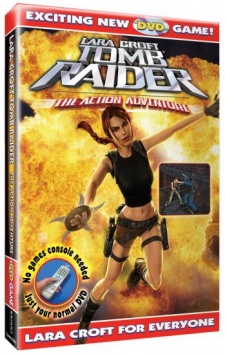 Cover
The Lara Croft Tomb Raider: The Action Adventure DVD Game, by Pinnacle Vision, was decribed as "a different kind of Tomb Raider game". It was released on November 6th 2006 and was an interactive DVD game played using a standard DVD player. The plot was taken from the game Tomb Raider: Angel of Darkness and Lara was voiced by Jonell Elliott.

Meet Lara Croft, beautiful heiress daughter of Lord and Lady Croft, adventurer and tomb raider, who is wrongfully accused of murder. Tough and clever, she fights to prove her innocence and recover the missing Obscura paintings.

EASY TO PLAY! Using the arrows on your DVD remote, you control what Lara does next. Help Lara scale walls, make huge leaps over obstacles, and carry tools through harrowing situations - make a wrong choice and your game may be over! Discover different ways to play and gain points to increase your score. Play solo, or in teams, plus, get passwords at check points that allow you to take a break and pick up right where you left off, hours or even days later!

Grab your remote and get started, you adventure is ready to begin.

Since she left behind her aristocratic inheritance in search of adventure, Lara has faced many perilous situations and dangerous foes but this might prove the most testing yet.

An old friend and colleague has asked Lara for help. Werner Von Croy is tracking five Obscura paintings for a client named Eckhardt, a client who appears increasingly dangerous. Werner is fearful for his life.

Although Lara is angry with Von Croy for leaving her to die on their last adventure, she decides to answer his call for help.