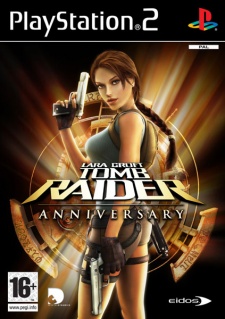 Lara Croft Tomb Raider: Anniversary is a game that is currently being made to celebrate Tomb Raider's 10th anniversary. At first it was supposed to be a PSP game made by Core Design, but this was cancelled. Shortly later Eidos Interactive announced that the game was back on track, now being completed by Crystal Dynamics and will come out on PSP, PC and PlayStation 2. So far it has not been stated, if the Unfinished Business-part will be included.

The Croft Mansion will also be back in Anniversary, as it was a success in Tomb Raider Legend and dearly missed in The Angel of Darkness and the later games of the first generation.

According to the lastest Trailer/Video issued by Eidos the release is going to be in June, however there are also other trailers that appeared mainly in Europe still bearing "coming May 2007".

Later throughout the year 2007.

A demo version is planned.

N/A (yet) It is likely, that the levels will not be exactly as in the original Tomb Raider as the streaming engine allows whole sections to be in one actual level.

The adventure begins when Lara is hired by a powerful syndicate to retrieve a mythical object called the Scion. As Lara searches ancient tombs and isolated worlds that have lain undisturbed for thousands of years, she discovers that she is not alone. Not only has she awoken their fearsome guardians but there are others desperate to learn the Scion’s dark secrets.

The Anniversary Edition is going to be a remake of the 1st Tomb Raider game but with better graphics and difficult puzzles.

The story will be told using more cut scenes than 10 years ago.

the world’s greatest action heroine of all time – use all of Lara’s guile, latest fluid movements, athleticism and gadgets in her quest to conquer the unknown and uncover ancient artifacts.

Crystal Dynamics latest technology allows you to fluidly manoeuvre Lara using her latest moves and gear, through all the worlds from the original; Peru, Greece, Egypt and more. The dynamic world allows multiple playthrough options and also opens up new places and ways to explore.

The environments in Tomb Raider Anniversary are much more interactive: Lara can use them for lots of things, pick up a piece of wood on the ground and use it as a ladder. Puzzles are more complicated than in Tomb Raider Legend. There is no clue or sparkling thing to show you where to go.

There is more than one way to explore the environments and complete a level. You can choose the acrobatic way, or the easier way.

Fighting enemies is still an important part of the game: the beast are much more realistic and their AI has really been improved. They are more dangerous than before, they develop a real strategy to kill you. For example the raptors run around Lara in circles until they are enough to jump at her and attack her.

There will be checkpoints like in Tomb Raider Legend where the game is saved.

On the search for the Scion Lara will travel to Peru, Greece, Egypt and Atlantis.

The inventory will be like in the first Tomb Raider (rotating ring). Additionally Lara will have her grapple, which will, according to rumour, not be magnetic this time.

It was announced that there will be lots of secrets in this game and that finding one will be accompanied by a secret sound.

Lara will have her classical braid, not the hair of Tomb Raider Legend. She will wear her Classic green Outfit and maybe more. Like in Tomb Raider Legend, several costumes will be unlockable, like the Sola Diving Suit and a full body black Catsuit.

There will be no vehicles in this game.

Alister and Zip will not accompany Lara during her travels this time.

She has to solve similar riddles as in the original Tomb Raider.

The Tomb Raider Legend controls will also be used in Tomb Raider: Anniversary. There will even be some new moves like running along a wall, rope in hand and balancing on a pillar. When Lara walks on unstable surfaces, you have to maintain her balance.

The rating is T for Teen which was said on the official website. The rating was given this because of Mild Suggestive Themes and Violence

Eidos Interactive Ltd., one of the world's leading publishers and developers of entertainment software, can confirm the European street date for the PlayStation 2 and PC Games For Windows versions of Lara Croft Tomb Raider: Anniversary will be June 1st 2007, with the PSP version to follow very shortly.

The world's love affair with Lara Croft began back in 1996 with the launch of the original Tomb Raider game. Since then, Tomb Raider has gone on to become one of the world's most successful videogame franchises of all time, and Lara's latest adventure, Tomb Raider: Anniversary is a celebration of Lara’s original adventure in an entirely new Crystal Dynamics game.

"The original Tomb Raider game made Lara Croft the icon she is today. Tomb Raider: Anniversary is our way of paying tribute to Lara and the history of the franchise that will not only appeal to her fans, but also encourage a whole new generation of Lara lovers," said Kathryn Clements, Senior Brand Manager, Tomb Raider.

Lara Croft Tomb Raider: Anniversary will ship throughout Europe on June 1st on PlayStation 2 and PC Games For Windows.

Eidos Interactive, one of the world's leading publishers and developers of entertainment software, confirms today that they are developing a special '10th Anniversary Edition' of Tomb Raider.

The new game is being developed by Crystal Dynamics, who recently launched Lara Croft Tomb Raider: Legend on Xbox 360, PS2, Xbox, PC and PSP, with versions on Nintendo DS, GBA and GameCube later in 2006.

"Our '10th Anniversary Edition' of Tomb Raider, is a one-off title to celebrate both Lara and Tomb Raider, it will appeal not only to the loyal fans of the Tomb Raider series but will also attract a totally new audience." Said Larry Sparks, Head of Brands Management at Eidos.

Tomb Raider originally launched in 1996 and is still one of the best selling videogame franchises of all time, with over 30 million copies sold.

The special '10th Anniversary Edition' of Tomb Raider will be available on PlayStation 2, PSP and PC.

We've also made plans for an anniversary edition which will be coming out next year, Ian Livingstone said in an interview with Eurogamer.

Eidos' Message to the Tomb Raider Community Eidos is pleased to announce some special news directly to the Tomb Raider community. The official name of the next Tomb Raider game is Lara Croft Tomb Raider: Anniversary, and the first screenshot is going straight to where it matters most - the people who have supported Lara across the years. As most of you may already know, Tomb Raider: Anniversary is a revitalized version of the original adventure that started it all. This game is more than just a remake; it is a celebration of Lara Croft and the history of the Tomb Raider franchise. One would need to be blind to not see the impact that Lara Croft has had, both on gaming in general, as well as pop-culture. She is a character that people connect with, a character that transcends the media in which she was originally presented. However, Lara's rise to fame didn't just magically happen. There has been a very powerful, dedicated fan base that has not only tracked her every move over the last 10 years, but helped transform her from being just a video game character, to an international digital celebrity. Every time a new Tomb Raider game has been released, the fans have asked for a remake of the original. Tomb Raider: Anniversary is our answer. This game is for the fans. It only makes sense that the first information, as well as much more to come, goes directly to the fans. We hope you enjoy the screenshot, and keep your eye out for more information soon...

Eidos Interactive Ltd., one of the world's leading publishers and developers of entertainment software, today confirms that the next Tomb Raider game will be entitled Lara Croft Tomb Raider: Anniversary and is set for release on PlayStation 2, PlayStation Portable (PSP) and PC in 2007.

Inspired by the first Tomb Raider videogame, originally released in 1996, LARA CROFT TOMB RAIDER: ANNIVERSARY is a totally new 2006 adventure for Lara, faithfully preserving the elements which made the original Tomb Raider such a classic, selling over 7 million copies worldwide. Using an enhanced 'Tomb Raider: Legend' game engine, the graphics, technology, physics and engine bring Lara's adventure and pursuit of a mystical artefact known only as the Scion right up to today's technology standards and will offer gamers a completely new gameplay experience.

"Over the years we have had literally thousands of requests to re-make the original Tomb Raider for today's gamer, we have gone a step further, we have taken the original story and made a completely new version for Tomb Raider: Anniversary." said Kathryn Clements, Senior Brand Manager, Eidos. "We are re-telling an incredible story using today’s technology, we've taken all of the key moments from the original game and put them into the context of a brand new Tomb Raider adventure which will make fans of the franchise extremely happy but also attract a completely new audience."

"We've captured the essence of what made the original game so special and with today's technology, created a game that pushes the boundaries of the current gaming consoles. Tomb Raider: Anniversary is a special celebration of Lara's reign as videogaming's leading lady" said Ian Livingstone, Eidos.

Lara Croft Tomb Raider: Anniversary is currently in development by Crystal Dynamics and will be available in 2007 on PlayStation 2, PSP and PC

Also, a video has recently come out on the internet showing the animation of the T-Rex and of Larson when it apparently was not supposed to be. This is a genuine video showing the T-Rex's animations alongside the velociraptors and bears and the animations of Larson. Crystal Dynamics and Eidos have not meant for this video to come out. It was put online on the animation artist's website and from there reached other Tomb Raider Fansites as well as youtube. It was quickly and inexplicably removed, although it has been confirmed that this video has been banned on the internet.