In 1984, when Lara was 16, she stayed with Winston and his wife in their small cottage in Connussie, off the coast of Ireland, for a while, while repairs were being carried out in Croft Manor. One evening she overheard a talk between Father Patrick Dunstan and Winston and being intrigued, followed the Father to his boat. Sneaking aboard she accompanied him undetected to the Black Isle, where strange things were happening and the demon Verdilet, who was imprisoned between running water, which he - being a demon - could not cross, was trying to escape. 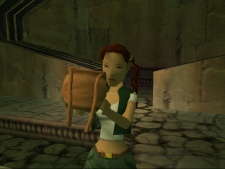 Lara Croft has brown eyes and brunette hair which she wears in a pony tail.