Difference between revisions of "Lara's Outfits" 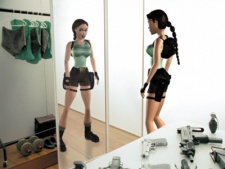 Lara's Outfits are numerous throughout the different games and other instalments.

In the original Tomb Raider Lara started off wearing her green top trademark outfit during the adventure and a Home Outfit in the Lara's Home level. The trademark outfit made its return in Tomb Raider II. In addition to it Lara had a new Home Outfit, a Sola Diving Suit, the Tibet Outfit - basically her standard outfit with a jacket and a Nightgown. Tomb Raider III again brought us a couple of new outfits for Lara. In The Last Revelation, the fourth instalment of the series Lara wore her basic outfit only, with the exception of a flashback where she wore another outfit as 16-year-old. Tomb Raider Chronicles brought us a few new outfits again, still including her basic outfit.

The Angel of Darkness was the first game not to include Lara's green-top outfit. Here she got a brand new adventure outfit (in long and short version) and was also seen in a Jeans and new diving suit outfit.

Tomb Raider Legend presented yet another outfit for Lara, the green top being shown in flashbacks however. In Tokyo Lara switched her regular outfit for an evening dress and in Kasachstan, as well as Nepal, Lara opted for a cold weather outfit. For the first time a number of additional outfits could be unlocked and worn in-game.

The Tomb Raider (2013) reboot game came with a basic outfit of torn clothes that was somewhat reminiscent of the original, although it included long cargo trousers. Other outfits were part of a pre-order deal or had to be bought as a DLC.

The Lara Croft Series of games also offered a wide variety of different outfits, and in the mobile Lara Croft: Relic Run they even can be used to modify Lara's abilities and can be upgraded.

In the Movies Lara's outfits were also very different from the games.

The Angel of Darkness

Six more outfits were released with Beneath the Ashes:

In Lara's Shadow one can play as Lara's Doppelgänger in her outfit:

In Tomb Raider (2013) there's one playable outfit unless one wants to download more. Two outfits (Hunter and Aviatrix) were part of exclusive pre-order deals. The outfits can be changed at Base Camps and Day Camps during gameplay.

There are few outfits that can be downloaded for charge

An exclusive outfit that dresses Lara up as a classic 1930s adventurer, bomber jacket and all.

An exclusive Hunter skin, an outfit that camouflages Lara in a heavy coating of mud, action movie-style.

"This outfit makes Lara look like a jungle warfare guerilla."[2]

"The Mountaineer outfit features the padded vest, grapples, and harness of an expert climber."[4]

"Outfit Lara with the Demolition gear, featuring an engineering jumpsuit and belt pack."[5]

The Season Pass for Lara Croft and the Temple of Osiris contains the following Outfit Packs for all playable characters:

There are so far 13 Outfits for Lara Croft GO.

The next two outfits are available from the beginning:

All other outfits have to be gained by playing the game and collecting items in the levels:

Complete the Gilded Skull to unlock

Complete the Twin Snakes to unlock

Complete the Frozen Spider to unlock

Complete the Blood Salamander to unlock

Complete the Necklace of Dreams to unlock

Complete all Gem sets to unlock

Complete the Sacred Beetle to unlock

Complete the Eye of the Abyss to unlock

There is a confusing amount of Outfits in Rise of the Tomb Raider, varying by platform, game version, and pre-order bonus. This lists all outfits, regardless of how to obtain it.

Brown hide and fur outfit made from deer skins.
OUTFIT BONUS: Reduces the delay before health begins regenerating when damaged.
Earned for finishing the Mission A Hearty Meal.

Camouflage pants and black tank top with tactical vest.
OUTFIT BONUS: Reduces the delay before health begins regenerating when damaged.
Can be bought from the Supply Shack in the Soviet Installation.

Camouflage pants and matching olive shirt with a tactical vest and scarf.
OUTFIT BONUS: Reduces the delay before health begins regenerating when damaged.
Earned for finishing the mission Unlucky Ones.

Light, gray tank top. Exploring old tombs has made it rather dirty.

Modern, insulated winter coat in a red and black palette. Perfect for mountain climbing and other extreme conditions.

Camouflage canvas jacket that is worn in places from previous usage.
OUTFIT BONUS: Reduces the delay before health begins regenerating when damaged.
Earned for finishing the mission Defensive Strategy.

Remnant outfit inspired by their Byzantine heritage.
OUTFIT BONUS: Manual healing has a chance to bandage without using any resources.
Part of a pre-order pack.

The mask and vestments worn by the witch, Serafima. A fearsome, animalistic outfit designed to strike terror into the hearts of your enemies.
OUTFIT BONUS: Increase the duration of your poison arrow clouds.
Earned for completing the Baba Yaga: The Temple of the Witch DLC.

Available throughout the game

The following outfit is available throughout the whole game:

Inspired by the classic Antarctica Outfit from Tomb Raider III

Available in Expedition Modes only

The following outfits are only available in Expeditions and in free roam after finishing the campaign: