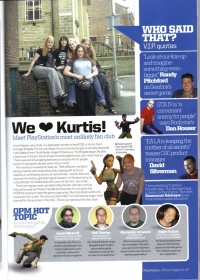 The KTEB (Kurtis Trent Estrogen Brigade), a fan club for Kurtis Trent, has been around in varying forms since 2003. The phrase 'estrogen brigade' comes from a popular internet trend for naming fan clubs of (predominantly) female membership, although this has become somewhat of a misnomer as a variety of males consider themselves members of the group.

The KTEB began life on tombraiderforums.com in 2003. It maintains a large presence there until this day, but most members relocated to kteb.net after encountering a lot of opposition and flaming from forum members.[1] To this day, the phrase 'kteb.net' is a curseword according to TRF's censor system,[2] and the website's existence is even questioned[3] by their partner site, Tomb Raider Wiki.com.

Originally a small group running a pseudo-newsletter, the KTEB eventually gained its own forums and website. They were Stella's featured website in July 2007[4] and recently celebrated their fifth anniversary in August 2008.[5]

The KTEB's mission is to promote the merits of Kurtis and, to a lesser extent, the game that he is featured in - namely, Tomb Raider: The Angel of Darkness. Their efforts have helped Kurtis be voted the 8th hottest male video game character[6] in a poll by TheGirlGamer.net. PlayStation Magazine UK dubbed the KTEB 'one of the internet's most feared lobbying groups'.[7]

The KTEB maintain a close relationship with Eric Loren, who provided the voice of Kurtis, and Murti Schofield, Kurtis' creator and the main writer of Angel of Darkness.[8][9] They have been mentioned in various mainstream gaming magazines, and were also the subject of an article in the April 2008 issue of PlayStation Magazine UK. Members hail from around the world and meet up on a regular basis, mainly in the UK, but meets have also been arranged in the US and Europe.

In September 2008, Murti Schofield gave the KTEB an exclusive biography about Kurtis as a thank you for their continued enthusiasm. The information had remained unreleased for over five years.[10]