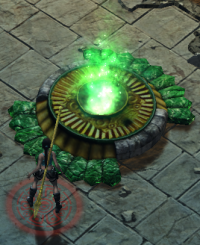 They are roundly-shped shrines on the ground that emit green light. When the player stands near them, they gradually refill the Health Bar. However, the healing power of these shrines is not infinite - they dry up after a while. A dried up Health Shrine does not emit green light.

Standing near a Health Shrine will gradually refill your health. Each shrine will eventually dry up after being used for an extended period of time.
In-game information[1]

The Health Shrines are not as common as the Large Medipacks are.

On the Toxic Swamp level there is a Reward Challenge "Heal the rolling ball." It can be completed by rolling a Rolling Ball to a Health Shrine.