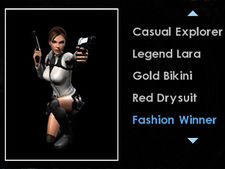 People's Choice, previously promoted as Marie Saint Pierre for the designer who created it, is an outfit in the Xbox 360 version of Tomb Raider Underworld. It was released as part of the Tomb Raider: Underworld Designer Costume Pack on 10 March 2009, alongside Lara's Shadow, free of charge.