Difference between revisions of "Excalibur" 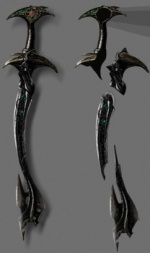 Completed Excalibur on the left, and the pieces on the right.
Excalibur is a legendary sword. There are primarily two origins for the sword. The first is that Arthur pulled the sword from a stone, an act which prophecy stated could only be performed by the rightful king of England. The second is that Arthur received the sword from The Lady of the Lake, who presented it as Excalibur "that is to say as to Cut-Steel". According to the second legend, as he lay dying, King Arthur requested that one of his trusted knights, Sir Bedivere, throw the sword into the lake. After some initial hesitation, he did so, and the lake re-claimed the sword. The sword was said to be capable of blinding Arthur's enemies, and it's scabbard would make it's wearer invulnerable to blood loss.

In the game, the sword has been split into five pieces which were scattered across the world:

The Ghalali Key is needed to piece together the sword that appears in Tomb Raider Legend. The sword is a key to opening two portals, located at Nepal and Tiwanaku, which lead to a mysterious foreign dimension called Avalon. If the sword is pulled out while connected to the portal, the portal will explode, as Lady Croft found out in Nepal. Currently the sword is in one piece and is in the possession of Lara.

At the end of Tomb Raider Legend, Lara keeps the sword, maybe Lara will be using it in Underworld.