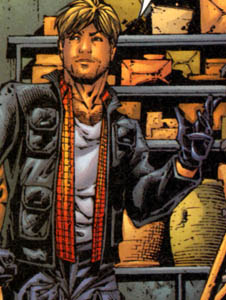 He is a treaure hunter, just like Lara. He and Lara were a couple once. But she'd like to think that's a long time ago. He's played with Lara and with her money.

Chase is killed in the Tomb Raider Comic Issue #14, when he and Lara were in a tomb searching for a treasure.