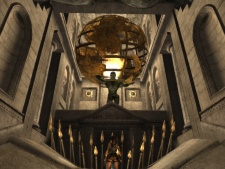 Atlas was one of the primordial Titans in Greek mythology. Atlas was the son of the Titan Iapetos and the Oceanid Klymene. During the Titanomcahy, a mythical war between the Titans and Olympians, Atlas betrayed the Titans and fought with Zeus and his fellow gods. After the Olympians' victory, most Titans were confined to Tartarus, but Atlas was instead condemned to forever hold up the sky.

In the original Tomb Raider, in St. Francis Folly, Lara finds a chamber dedicated to Atlas. It has a Boulder on the end that, when triggered, rolls to the lower floor with a grey circle to open the gate. Further on a higher platform you can pick up the Atlas Key.

In Tomb Raider Anniversary, in Greece - St. Francis Folly, the chamber of Atlas has a statue of a man figure carrying the weight of the world, a huge globe to be exact, on his shoulders. The trick to complete this Atlas' Riddle is to get the globe to roll to a deep pit in the floor in order to reach the Key of Atlas.

A statue of Atlas is also located in Croft Manor in Tomb Raider Anniversary.