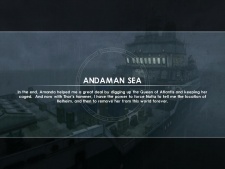 The Andaman Sea Section is the sixth section in Tomb Raider Underworld.

When Lara has obtained Thor's Hammer from Jan Mayen Island, she decides to pay Natla a visit and force her to tell the location of Helheim where Lara believes her mother is.

Lara's notes on the expedition:

With Zip having discovered the location of Amanda and Natla, Lara returns to Thailand, and infiltrates Amanda's sister ship. Using Mjolnir to smite any mercenaries foolish enough to stand before her, Lara fights her way below deck to confront Natla. "Avalon, Helheim, I don't care what it's called - where is it?" she demands.

Lara learns that any desire she may have for vengeance against Natla will have to wait, as only the Atlantean knows how to open the way into Helheim. When Amanda enters the room, she and Lara are poised to fight, but Lara's doppelgänger suddenly intervenes to hurl Amanda through a glass panel in the floor and into the depths below. Lara furiously attacks her near-identical nemesis, but once again, cannot land a clear shot before it escapes. When Natla comments on her behaviour, Lara smashes the glass prison and barely controls the urge to execute her on the spot. "Get out of my sight," Lara growls.