From WikiRaider
(Redirected from Atlantis Pyramid)
Jump to: navigation, search 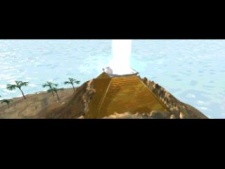 The Atlantean Pyramid may have been the centre of Atlantis, geographically and politically, although identifying a possible geographical location is problematical. (It is unclear whether Tomb Raider's Atlantis is the same as Plato's City of Atlantis.) If located in the City, the Pyramid may have been the tallest structure and might be where the Scion was created. Possibly the Pyramid represented the power of Atlantis and the Scion itself. The Pyramid survived the destruction of Atlantis but was finally destroyed in an explosion that was triggered by Lara Croft after she destroyed the Scion.

The Pyramid appears both in Tomb Raider and Tomb Raider: Anniversary. It gives a golden look on the outside suggesting it is either made of gold or yellow brick. At the summit appears a golden flash of energy that is triggered when the Scion is placed in its altar. After the destruction of Atlantis, the pyramid over time became encased in rock and mud with the main entrance being submerged and thus formed a small island, the last remnant of Atlantis. When Natla put the Scion in its altar, the surging energy broke off the top rock casing revealing the summit of the pyramid and the energy being given off.

Anniversary appearance with the pyramid concealed

The inside of the pyramid is made of dark stone with a large proportion of that stone being covered in living muscle fibres and skin tissue. Intricate red patterns are carved into the stone around the pyramid, which mainly consists of rooms and corridors linked to the main chamber. This chamber lay at the centre and is very tall with a pool of magma covering the floor. Atop the main chamber is the throne room that contains the altar of the Scion. There are numerous hatcheries with a main one at the entrance corridor. Magma rivers flow across certain areas of the complex. Some areas are flooded with water and there are many doors restricting access that require switches to be used. One room produces a muscular copy of Lara which mirrors her every moves and cannot be destroyed by weapons. A platform at the top of the main chamber houses the Legless Mutant, which hatches when Lara is pushed from the throne room by Natla and lands on the platform. A gathering hall with large columns lies at the end were Natla makes her last stand.

The pyramid has kept the main features from the original but seems to have less corridors and rooms. The main chamber this time needs to be climbed using wall hooks and poles that are on a timer, triggered by gunfire. There are many cocoons on the walls which hatch into flying mutants. The main hatchery and doppelgänger room are present as well as the throne room and the antechamber before it. A smaller version of the gathering hall is present where a battle with Natla occurs. The décor of the pyramid does not have any muscle fibres covering the walls, instead it follows the stone with carved patterns look. Ancient writing can be seen everywhere carved in gold. The doors are much larger and open from the centre.